TV REVIEW: The Bronx Is Burning 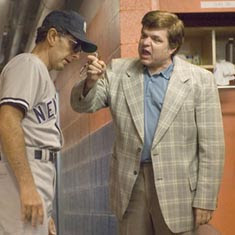 Because I'd finally caught up with almost everything else, over a two and a half week stretch recently, I managed to watch all eight segments of the ESPN miniseries The Bronx Is Burning, ostensibly about the New York Yankees' 1977 World Series win, their first since 1962, despite the tension among Yankee owner George Steinbrenner, manager Billy Martin and outfielder Reggie Jackson. It was also about the .44-caliber killer known as Son of Sam, and the general decay of New York City.

I had a personal interest in this story, for I was living in Jamaica, Queens from May to September. I was hanging out partying late at night and was just a tad paranoid about Son of Sam, and I remember the screaming red-letter headlines on the New York Post when David Berkowitz was caught in August of 1977.

The production featured the actors in scenes, interspersed with footage of the era, both in the baseball scenes, and in the atmospheric segments about the blackout, the mayoral race between Ed Koch and Mario Cuomo (I voted for Cuomo, BTW).

The good things about this production: John Turturro as the Billy Martin, and I say that not because Turturro graduated from my alma mater of New Paltz, but because he seemed to embody, rather than imitate, the fiery manager. Erik Jensen as Yankee captain and catcher Thurman Munson. Kevin Conway, who plays Yankees Prez and GM, Gabe Paul; he doesn't really look like Paul, but his caught-in-the-middle performance rang true. The great background pieces at the end of each episode featuring Jackson, Steinbrenner, Yankees Chris Chambliss and Fran Healey, Dodgers manager Tommy Lasorda, and Billy Martin's son, Bill Jr. (Martin was killed in a one-car crash in Binghamton, NY - my hometown - on December 25, 1989.)

The so-so parts: Oliver Platt as Steinbrenner; he looked like Oliver Platt playing Steinbrenner. Joe Grifasi as Yogi Berra, who didn't seem all that bright and was there to share Italian-American insults with Martin. Leonard Armond Robinson as Mickey Rivers, and whoever played Fran Healey were OK. The guys playing the cops in the Son of Sam investigation, featuring Dan Lauria (Wonder Years). The use of the real video, although seeing the cheesy ABC Sports logo was a hoot.

The not so hot parts: Daniel Sunjata as Reggie Jackson; it wasn't just the look, it was the feel of the character. Most of the other supporting players, especially the women, were ciphers. The guy playing Lou Pinella looks nothing like him, while a press guy reminded me of Yankee pitcher Catfish Hunter. And most of all, the Son of Sam killings, which almost all involved a couple of Noo Yawkers babbling something to each other before they were shot by Berkowitz; they all felt the same.

So, it wasn't great, it wasn't awful. I'm glad I saw it because it was a good reminder of the era. If you rent the DVD, which will be out later this month, I have the sense that the extras will be more enjoyable than the core item.
***
Here's a weird TV thing: I was watching a rerun of Scrubs recently. The original episode aired on May 10, and was 40 minutes (more like 38). But when it was rerun in the last week or two, it was in the 30 minute slot. How did this work? Cuts. J.D. and Turk's voice-over dialogue as they were driving away. Kelso's dis of a woman his age or younger at a convention as too old. But mostly, the whole scene with J.D. and Turk at a lecture conducted by J.D.'s pregnant ex-girlfriend was broken in half in the original, with a "Busta move" piece of verbiage, but continuous in the repeat, sans "Busta move". I wonder if both versions will show up on the DVD?

I recall hearing that Turturro had gone to New Paltz. I recall seeing a campus rendition of One Flew Over the Cuckoo's Nest with an excellent performance by the actor playing Chief Broom; always wondered if that had been him. Guess college productions don't usually get listed in someone's bio, though!

CD- Re: Turturro, YES! "... that his first stage role was as Chief in a college production of "One Flew Over the Cuckoo's Nest"?"

I disagree with your assesment of Platt and Sunjata. They were both excellent as they matched up to my memories of being 20 years old and living in a crummy studio apartment in the bronx at the time of the 77 world series. Even though I was (AND STILL REMAIN) a Mets fan, Bronx brought back many a fond memory of NYC and the Zoo that was the bronx at that time. But your analysis of the show in general was pretty spot on. And yes Turturro was amazing as Martin. Ciao buddy.