Yet another conversation about politics 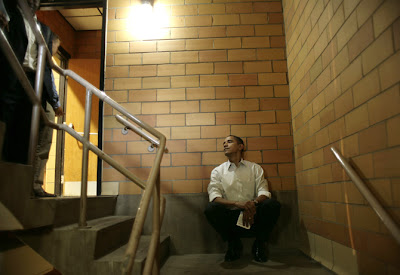 I was commenting on Anthony's thoughtful, as usual, essay, Are Americans Suspicious of Intellectuals?. My answer was a resounding "Yes." The conversation went back and forth, somewhat heated at times, and I chimed in: "Ultimately, my primary reason NOT to vote for Palin/McCain can be summed up by the frenzy of hate they and their supporters have stirred up. My favorite example. Seems somehow antithetical to what the country needs right now."

Someone named Kevin Benson responded: "Roger - Wow! Do you really feel that there is less hate on the left than on the right? If so, you have been doing some very selective listening. Unfortunately, ignorance, hatred, and prejudice are too prevalent across the political spectrum. If you are going to vote based on the 'frenzy of hate', you really should not vote for anyone."

Anthony jumps in, and says, in part: "Kevin - I agree with you that there is equal disinformation and hateful rhetoric on both sides of the political divide, but I have seen more appeals to 'not one of us' rhetoric coming from the McCain/Palin camp during this election season. What I mean is that Palin particularly, and some of those at the McCain/Palin rallies have directly and indirectly presented Obama as 'not a genuine American,' a man who has other than American interests at heart. And, maybe it is just me, but among all the negative campaigning on both sides, this particularly gets to me."

I respond: "Kevin - What Anthony said. Sure there have been attacks on McCain as old, out of touch, plus some legitimate health concerns. Even HE jokes about his ill temper. Palin is portrayed as not very with it, though not until her conversations with Gibson and Couric suggested that. Biden is a loose cannon who doesn’t always know when to shut up, he might acknowledge.
"But Obama’s been called a traitor, doesn’t love his country, an Arab (not that there’s anything wrong with that except it was used to evoke post 9/11 feelings and it’s not true), a Muslim (ditto), etc. I mean, what does “Who is Barack Obama REALLY?” supposed to suggest? Not Repudiated: Hate Talk Express-McCain/Palin Hate Every Day!".

Apropos of that, the picture Colin Powell alluded to on Meet the Press during his endorsement of Barack Obama : 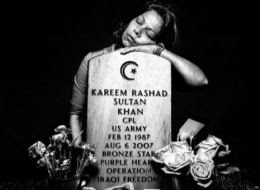 Painfully, some of the smearing works. A Democratic committeeperson in Albany County asked me just yesterday, "But what about Obama being sworn in on a Koran?" I could have screamed, but gently, rationally noted that the information was NOT true and that she ought to go to Snopes.

Oh, I hear LOTS of frenzied stuff on both sides, to frankly a tiresome degree. But some independent entity determined that while virtually all of McCain's ads during a recent period were attack ads, only 1/3 of Obama's were. And I dare say, most of those were responses to the McCain ads, such as one noting that the McCain ads were "not true", lest he be swiftboated.

No, Kevin, I totally disagree that the "frenzy of hate" is caused equally by both sides. The "otherness" attack which may be code for race-baiting, and race is still the subtext, is hardly the equivalent to suggestions that Palin could be an extra in the movie "Fargo". And heck, the abandonment by folks from the political right of the spectrum is certainly fueled at least in part by the realization that the McCain-Palin rhetoric is fundamentally flawed.

And while I'm noting things from other blogs, Nik wrote: "Obama has proven to be pretty masterful at projecting a cool, collected vibe, even if it sometimes is a bit stiff. But McCain has been all over the bloody show at all three debates, by turns hyperactive, frazzled, arrogant and insecure." To which I wrote: "I'm convinced the "stiff"-ness you perceive (probably correctly) in Obama is his self-training in not being the 'angry black man'."

Amazingly, it was only then that the obvious parallel came to mind: Jackie Robinson. Jackie was a proud (and occasionally angry) black black man, who Branch Rickey told to suck it up, take the insults, and break baseball's color line. I think that Barack may have learned to be preternaturally calm because he's had to learn to straddle the color line virtually all his life.

The person sent me the picture above wrote, "What must it feel like? To carry the hopes and dreams of an entire race of people on your shoulders?" And I suppose that's become true. Though less than a year ago, it was Hillary, not Barack , who was the choice of most black Americans. And most blacks would probably have voted for whatever candidate the Democrats put up, though I think Obama's candidacy will spur a greater turnout.

Finally, Arthur and Jason had their post-debate podcast, and there was a discussion about polling. It's my contention that polling will be "off" significantly, not just because the pollsters miss all of those mostly younger voters without landline phones, but also because many states allow for early voting without cause. (In New York, I would have to be out of town or in the hospital. Oooh, I'm not feeling so well. May I vote now? PLEASE?)
***
How Muslims become racialized
***
Ballotpedia wiki provides information concerning ballot initiatives in each state.
***
Ted Nugent (yes, that Ted Nugent) on McCain-Palin "closing the deal".

Obama represents a significant moment in the history of race in this nation. I have been disheartened by the number of people who have fallen back upon the same ol' tired racist images because (I think) they are afraid of change.

Then again, I am truly confused how, after the past eight years (not to mention the fiasco that was Reagan/Bush I), the Republican party gets any votes -- ever.

I think GayProf is right, though I think much of that falling back is kind of covert–the "he's not one of us" variety. Which is not to say that overt racism isn't there—it is, just look on any wingnut site. I also agree with GayProf about not understanding how anyone could vote Republican (and I'm an ex-Republican), but that's another topic entirely.

What struck me, though, was the claim you mentioned that there's hatred on the Left. It fascinates me that some people really believe that's true, as the Republicans keep claiming.

In the main, liberal and leftist sites just don't display the level of hate speech—veiled or direct—that supposedly "mainstream conservative" sites do. We don't question the patriotism of either Palin of McCain, we don't suggest that either isn't a "real American" or that they're not "pro America". Republican rhetoric is completely different than liberal and Democratic rhetoric. I'd offer this advice to Republicans and conservatives: Claiming to be a victim doesn't make it so.

I agree with you about the polls. One thing I noticed about Obama's record-breaking fundraising in September is that most of the new contributors were either young or older (which is a hopeful sign for Florida). If young people are motivated to donate to a record-setting tally, and they're not being counted in opinion polls, then the polls could be way off in many places—but in a good way.

The trouble is, Republican vote suppression efforts in other areas may counterbalance that. We need every vote we can get—early or not!

Since I'm a lefty hanging out with lefties, I hear pretty much uncensored commentary about the right all the time. But in terms of hate, nothing compares to the email a cousin sent me, showing photos of the two candidates circa 1968...McCain in his uniform, Obama in an Indonesian hat and tunic. The text: "If you're voting for Obama, is your head up your ass?" And that's mild compared to what we've been seeing at Palin's rallies.

The "hatred" I see on the left is disgust and fear at people whose policies are genuinely threatening. As an atheist married to a Jew with a gay stepdaughter, living in a southern city which had cross burnings only a couple of years ago, people stoking hatred against people who don't subscribe to a certain racial/religious/ideological profile is not a frivolous concern. And that hatred is definitely coming from the right side of the spectrum, not the left.