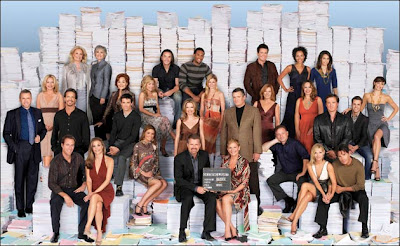 The end of the 72-year run of the soap opera Guiding Light, started in 1937 on the radio, and since 1952 on television, probably got more play on CBS recently than the show has garnered in years. Stories on both 60 Minutes (along with Barack Obama and Teddy Kennedy, FCOL,) and CBS Sunday Morning showed that the institution was finally getting its due, even if it was to sound its death knell.

When I was a kid, my grandmother and my great aunt used to watch their "stories" almost every day. Binghamton, in the early 1960s, only had two TV stations, Channels 12 (CBS) and 40 (NBC), and only one was a VHS station that did not require rabbit ears, and that was the former, WNBF.

So they would watch Edge of Night and Secret Storm, which were on, if I remember correctly, at 3:30 and 4 pm, respectively. I saw them often enough that I was reasonably familiar with the story lines and characters. But the other CBS shows they watched, The Guiding Light and Search for Tomorrow, were on while I was at school. This bout of soap watching ended when I was old enough to go to my own home after school rather than to my grandma's, at some point between fifth and seventh grade.

I did watch many of the soaps in February 1975, but I was depressed.

When I was a Census enumerator in 1990, after I had made my initial daytime passes to the homes, I had to concentrate on nights and weekends. So I was home a lot during the day. I caught on NBC a soap called Generations, followed by Days of our Lives and Another World. Generations got canceled in 1991, and Days had some plot line so ridiculous, even by soap opera standards, that I dumped it in 1992 or so. Another World I watched until a week before it ended in 1999, when Carol and I went to Barbados on our honeymoon. I could have taped them on the VCR, but there was only six hours of capacity, and I opted for prime time, season-ending fare. I keep hoping that the Soap Opera channel someday shows that last week of AW.

So, for some obscure reason, I watched the last episode of Guiding Light. It looks a LOT different than it used to. It's mostly outside, for one thing, and they don't appear to be using the same type of filming techniques.

There was a LOT of hugging in this episode, so much that if I had made it a drinking game, I would have had to have been rushed to the hospital with alcohol poisoning. To the degree I can tell, the lesbian couple are now happy because one member of the couple has made peace with her ex-husband, naming the baby she's carrying after him; one of the actress used to be on Days. The black couple finally gets married on its fourth attempt; good thing, too, because SHE'S pregnant as well. Some time before this, the black couple walks in on the interracial couple in the midst of them about to have sex. One young woman going away to college in California is suddenly joined by a second young woman, because her mother made a phone call to get her instantly admitted; while it's never stated where Springfield is, obviously it is far from California.

The only people in this show I know at all are the "supercouple", Reva and Joshua, who have each been married nine times, three times to each other. Will they get back together for good? That gets resolved in a One Year Later motif.

Was it worthwhile watching? Maybe not; tying up all those loose ends seemed terribly convenient. But there's something to be said for acknowledging a passing.
ROG
Posted by Roger Owen Green at 9/20/2009 05:02:00 AM

Both my parents worked in the 60's and early 70's, and I stayed with my grandparents on weekdays- my grandmother Jones never missed what she, too, called her "stories". She watched Days of Our Lives (..."like sands through the hourglass...these are the days of our lives!"), but also Secret Storm and Edge of Night, which was, I think, her favorite. I kinda liked it too, because it was more like a murder mystery/crime solving kind of soap, at least in those days.

Of course, I couldn't wait till these were over because then it would be time for Shindig or Where the Action Is, then later reruns of stuff like Gilligan's Island or Gomer Pyle, USMC, and then at 4PM the glorious Big Show, which screened monster movies from the 30's, 40's 50's and early 60's, along with Elvis and Jerry Lewis flicks. Helped warp my childhood, it did.

Oh, these were all on Nashville TN's Channel 5...

My Mom used to be a big Days of Our Lives fan. I knew what was going on with the show through osmosis. Mostly due to my Mom being busy during the day and watching the taped shows at night. Marcia is also a fan of the show, though she does miss a day or two along the way. With my being laid off, I find myself watching it from time to time now.

I think this is a bad sign, in a way, that Guiding Light is gone. I think many of the soap story lines and characters are really bad. But at least it's fiction (so to speak). I don't like reality TV which is pushing the soap into extinction, because it could push other shows that way, too.

I love that term, "stories."

I was somewhere recently, and a soap was on the television. I was stunned to see most of the action was outside. It was really weird. I never watched soaps (occasionally I would catch an episode of General Hospital in the mid-1980s, because my sister watched it), but there was something comforting about the faux-exteriors. It was bizarre watching action that was actually, you know, outside.