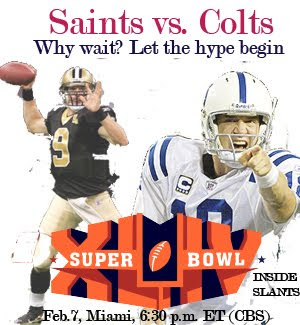 1. Do you watch the Super Bowl? (That's American football, BTW.) If so, is it for the commercials, the game or the halftime entertainment? Do you have special food for the occasion?

And speaking of halftime, don't you find it interesting that it is The Who performing when the game is on CBS, since The Who provide the theme songs for all those CSI shows on CBS, such as CSI: Las Vegas, CSI: Miami, CSI: New York, CSI: Kalamazoo, and CSI: Portland (both the Oregon AND the Maine shows).

If you don't watch the game, do you have a ritual for that? I had friends who always went to the movies on Super Bowl Sunday.

And those of you outside the United States: can you even access the Super Bowl?

3. Do you have a rooting interest? I'm pulling for the New Orleans Saints, who have NEVER won a Super Bowl, and I can imagine would be a psychological boost to the city post-Katrina. I wouldn't be devastated if the Indianapolis Colts won, and they are rightly favored.

4. What do think of the Pro Bowl, the all-star game of the NFL, being played the week before the Super Bowl (i.e., today), instead of the week after? Strategically, it makes sense to have an all-star game during the season, as it takes place in most other sports. On the other hand, since the players from the Super bowl won't be playing the game, and they were the best two teams all year, it's a bit of a lesser product.

Football 101.
***
A couple Who covers - Betty LaVette and the Ukulele Orchestra.

1. Yes, I watch. I start to watch, hoping for a good game. If it seems to start being lopsided, then only the commercials interest me. I could care less about halftime.

2. Yes. I think like most boys growing up, we quickly learn Roman numerals due to the Super Bowl.

3. I wouldn't mind either team winning. I like Peyton Manning and the Colts organization. They seem like a really classy team for a long time. And seeing the Saints help their city has been great.

4. I think the Pro-Bowl is the biggest joke of the All-Star games. I have barely ever watched it because of the lack of drama. The NHL and NBA All-Star games are a bit ridiculous, but at least you can see some spectacular plays. MLB's All-Star game now has some drama, and has always interested me regardless. Even without the incentive baseball can still be exciting to see how a pitcher handles a certain batter. No one wants to look bad, even if it doesn't count. So because of all this, the Pro-Bowl just seems dumb to me. It may be tempered by my not being a big NFL fan (I prefer the college game), but then again I like the NBA even less, but still would rather watch their All-Star game if having to choose between the two.

1. If Cleveland ain't playn then I ain't watchin.

4. I hate seeing a Brown make it the pro bowl. Seems like dumb reason to risk an injury.

The all star concept is really for people who don't understand chemistry and its relative importance to any organization. This is why the Yankees continue to play poorly despite an All Star line up or why a band like HSAS is doomed before it ever started.

It is the UNKNOWN guy who does the the UNNOTICED things that make the All Star the All Star.


I much prefer draft day over the Super Bowl.