Sometimes I write a post which I start then forget about, then find again. This isn't one of those. This was actually found in our front lawn by my wife, a green handkerchief with two notes on either side of the fold.

One note reads, in all capital letters:

{Name 1], I long to meet your needs in a supernatural way. I want to bless you more than you even can even imagine. Don't hold back by limiting my ways to your ways. I can make a way where there is no way. Even as Paul sent forth handkerchief, so my servant, [Name 2- first and last name], has sent you this handkerchief in obedience to me, as an act of faith, that I will meet your need with a miracle. Release your faith now and believe my word.

Then, handwritten (though it looks Xeroxed):

[Name 1], receive this word.
I am standing in prayer with you. [signed Name 2, first name only]

On the other side of the hankerchief is Name 1's full name and full address, three or four blocks from our house.

Write the amount of money you need here:

Initially an amount was written, then whited-out and replaced with the handwritten, "Thousands of dollars."

In the King James Version, Matthew 18:19 reads: "Again I say unto you, That if two of you shall agree on earth as touching any thing that they shall ask, it shall be done for them of my Father which is in heaven." 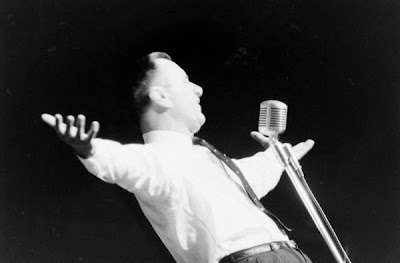 WOW. This disturbs me more than I can explain. There's an old tradition of taking a Bible verse, pulling it out of context and "proof texting" a point. It seems clear, at least to me, that the two gathered together would be praying for God's church, not personal wealth. And this commentary agrees:

WHAT VERSE 19 IS NOT
1. Verse 19 has NOTHING to do with requests to God by a believer, in relation to health, wealth, happiness or any other aspect or desire in their own life...
5. The two persons of verse 19 are NOT individual Christian believers making requests for themselves.

This reeks of charlatan theology in the Oral Roberts/Reverend Ike tradition. I'm wondering what kind of "contribution" this person made to receive the "gift" of the handkerchief. Yet another example of "Christians" making Christians look bad.

Roger - You pretty much said it when you talked about proof texting and pulling a verse out of context. Like you, I pulled out a commentary and what follows is my understanding of what I read:

The passage invoked in the note you found has to do with the procedure for resolving conflict between two Christians, when one Christian has wronged the other. In this procedure if the offense is not resolved between the two Christians the matter is eventually to be brought before the Church. The two or three gathered in Jesus' name reflects Jewish custom based upon passages in the Old Testament regarding the number required for official judicial procedure. The ultimate idea is that the Church can function as God's agent in carrying out discipline towards believers, to punish and ultimately restore.

What's potentially ironic in your instance is that that person's use of scripture to support this belief and then foist it upon others could potentially constitute an offense, which if not repented of, could bring him under the indictment of the two or three witnesses he is invoking. Of course, in my experience, churches don't really function like this as our attitude is so much more "cest la vie."