Chronicles of the Fantastic Four Chronicles 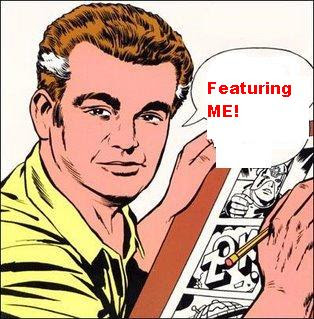 (This conversation will be limited to the Chronicles series. FantaCo had also put out Splatter Movies and Hembeck 6, among other items, in this period.)

The X-Men Chronicles was a hit for FantaCo Enterprises in 1981. We had printed 50,000 copies and had presold at least 35.000 to the distributors. And not only did it also sell as an individual item in the store and in the mail order, we were able to trade some for Marvel, DC and other companies' product, particularly underground comics from Last Gasp, a company our comics distributor, Seagate, wasn't dealing with.

So what do we do as a follow-up? We decided to do two books, the Daredevil Chronicles, which Mitch Cohn would edit, and the Fantastic Four Chronicles, which would be my baby. I'm not going to talk much more about the former, except that I thought it was terribly Frank Miller-heavy. One of the Mullaney brothers from Eclipse Comics, Jan or Dean, apparently agreed; he wrote to say he read the book and threw it in the trash. (The letter, I think, appeared in the Spider-Man Chronicles, or maybe the Avengers Chronicles.)

The stuff below in italics is directly from my journal:

September 2, 1981: I call John Byrne, who agreed to write an article and do a centerspread, in addition to the front cover. And I called Jack Kirby, who agreed to fill out a questionnaire about the FF. "What a coup!" I wrote.
October 16: George Perez agrees to do the back cover for the FF book.
October 22: Receive Byrne front cover, centerspread and article.
November 5: Call Jay Zilber re: Wein/Wolfman interview. Then called Jack Kirby re: Q&A - he said he couldn't answer questions re: FF, Marvel, only re: new projects. I panicked and got upset and angry. By that point, we probably had sent out info on the book to the comic distributors, indicating its content.Mitch calmed me down & said "Why don't you do interview on Kirby now with a caveat. He [Kirby] agreed to that & also said I could use the rather nasty stuff re: FF 236 & his lack of prior knowledge that it would be used. Typed up new questions.
November 18: Michael Hobson of Marvel called to OK licensing on the FF and DD books, and that the company had "no problem" with the non-licensed X-Men Chronicles.
November 23: Get Kirby response.
December 17: I was going to do some editing (e.g., Joe Fludd's lengthy piece, Jay Zilber's just-arrived article), but instead spent most of the day looking unsuccessfully for a letter from Mike Hobson of Marvel giving us permission for licensing, which Tom needs for another bank loan.
O.K., I lied. I AM going to talk a little about Splatter Movies. This was a book written by an author named John McCarty that was really Tom's baby; Mitch, Raoul and I were all a bit disturbed by it, although I did end up up proofreading it. And it turned out to be the most profitable thing FantaCo published in my tenure there. But at $8.95, it was initially a slow road selling to our distributors, who, after all, were comic book folks. This created a cash flow problem, for which the loan was to address. 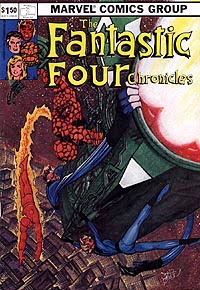 January 3, 1982: Type the FF checklist at home while I watch football (Cincinnati beat the Bills, the 49ers beat the Giants; I doubt I was happy about that.)
January 7: I assume we found the Hobson letter eventually because Tom was able to secure $25,000 note from the bank so we'll be able to pay $8700 printing bill for Splatter Movies.
January: Get various articles and artwork, not including Perez back cover. At some point, I call John Byrne, who allows us to use the front cover as the back cover as well, for free. Byrne was not universally loved, but I always had very good dealings with him; the FFC was not the last time. After the covers go to the printer, Perez cover FINALLY shows up, and I end up replacing content from one of the inside covers. (I'm thinking it was a Joe Fludd piece, because it seemed ironic that such a Perez devotee would be bumped by Perez himself.)
January 26: Tom called accounts (Bud Plant, NMI, Pacific). We now have fewer than 100 out of 50,000 X-Men Chronicles, and anticipate print runs of 70,000 each for FF and DD (the latter, eventually set at 80,000).
March 1: Start shipping out FFC, DDC orders, which takes a week, between the wholesale and retail orders.
March 5: Tom had made up 100 copies each of FFC and DDC in white paper stock, rather than newsprint. Gave 25 each to Mitch and me, 2 each to Rocco and Raoul. Somewhere I still have some of these.
March 15: Returning artwork, paying contributors, sending out review copies.
March 22: For Spider-Man Chronicles, got a Fred Hembeck to interview Roger Stern.
March 26: Mitch called Jim Shooter, who told Mitch in no uncertain terms ("What the f*** were you guys thinking about?") that they at Marvel were unhappy with the Chronicles series, that there can be no licensing in the future, and that we'd "better be careful" in the future...No [more] Chronicles would be disastrous because another loan was contingent on publishing them...Tom called a patent attorney.
Oddly, a couple months later, there WAS further conversation with Mike Hobson about licensing, but nothing ever came to fruition, and the Avengers and Spider-Man Chronicles came out license-free, with no hassle from Marvel. We DID have another legal tussle, however, but that's for another day.

Man, I read that mag so many times during my formative years that it started to fall apart. Even hung that Byrne centerspread on my wall. Thanks for the fantastic read, Rog! Shame to hear Shooter the Shmuck pretty much derailed the entire project down the road, as I felt the mags were only getting better with each attempt (the Spidey one with that great Stern interview probably is my favorite).

Man, I love those old Chronicles books. While there were a few odd items (eg. the Inferior Five article in the X-Men book), and the Daredevil book was admittedly a little Miller-heavy, they were comprehensive and well researched. I especially appreciate the checklists, I still use them occasionally to factcheck some odd bit of trivia. I wish someone would publish something like it today. Although, with the Chronicles covering roughly 20 years, and roughly 25 years having past since, the volumes would be positively massive!!!

And as I recall, those last two
Chronicles (Avengers and Spider-Man) just featured a generic Chronicles logo, not the characters' like the earlier ones did. Was that to appease the licensing people?

I love reading history of this period. Thanks!

Anon- I thought that Inferior Five story was SO off the wall that I loved it.

Nik-If I find my stash, remind me to send you a copy of the FFC.

Chris-You betcha it had to do with licensing or the lack thereof. But I thought they looked nice, esp. the Spidey book.

I got both the Fantastic Four and the Avengers issue, both bought for the Perez artwork, more then twenty years after they had first come out. Even at so late a date the articles were still interesting and relevant, especially the interview with Roy Thomas and another FF writer complaining about Byrne's art and writing on that title, finding it disrespectful of their own efforts.