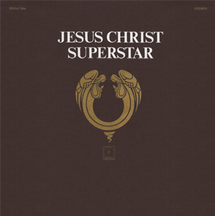 My friend Ellen has one of those turntable thingies that transfers vinyl into digital recordings. She recently made a couple recordings for me, both of Andrew Lloyd Webber/Tim Rice collaborations that I've long had on LP, Joseph and His Amazing Technicolor Dreamcoat and Jesus Christ Superstar. Dreamcoat, which was written first but recorded after Superstar, was OK, but Superstar had a profound affect on my way of thinking; perhaps it still does.

I originally got this album for Christmas in 1970 and played it so often, I can STILL tell you where all the skips are on my recording. I found it to be a great jumping off point for great theological discussions, rather than the anathema that some religious folks thought it was, especially with my friend Pat Wilson, a good Catholic woman who was the wife of my dentist. (For context, think of the controversies that Martin Scorsese's 1988 film "Last temptation of Christ" or Mel Gibson's 2004 movie "The Passion of the Christ" engendered in certain circles.)

Overture - Ensemble
It starts with that insistent theme that appears in the next song, hits the high point with the "Superstar melody, and ends with the mournful last piece.
"Heaven on Their Minds" - Judas
I happen to think even today that there are those who worry too much about heaven and not enough about treating God's people on earth.
"What's the Buzz/Strange Thing, Mystifying" - Jesus, Mary, Judas, Disciples
While Jesus is a tad snarky here, it is consistent with his frustration with his disciples that after three years, they still didn't get it.
"Everything's Alright" - Mary, Judas, Jesus, Disciples
The religious elite were often complaining about the lowlifes Jesus hung around with. But I DO think we have the resources to "save the poor from their lot", if not the political will.
"This Jesus Must Die" - Caiaphas, Annas, Priests, Disciples
Always loved the deep voice of Caiaphas voice.
"Hosanna" - Caiaphas, Jesus, Disciples
It has always astounded me about the mood of the crowd from the cheers of Palm Sunday to the rejection on Maundy Thursday and Good Friday.
"Simon Zealotes/Poor Jerusalem" - Simon, Jesus, Disciples, Roman Guards
Simon and others thought that Jesus was going to be the second coming of the warlike Maccabees, which was not the plan. "To conquer death, you only have to die" was not, in the Biblical context, a reference to physical death but rather death to a sinful life.
"Pilate's Dream" - Pilate
This is the same tune as Poor Jerusalem. Initially, i thought this was a mistake, but it's performed so differently that this has become one of my favorite songs.

"The Temple" - Jesus, Profiteers
There was a second century philosopher whose name escapes me who thought that Jesus was pure love. But this is an angry Jesus. This is the first time, save for the Overture, that the Gethsemane theme appears.
"Everything's Alright" (reprise) - Mary, Jesus
"I Don't Know How to Love Him" - Mary
Not the first and certainly not the last to suggest a sexual/romantic relationship between Mary Magdalene and Jesus - see, e.g., Dan Brown. I didn't believe it, but this suggestion did not bother me.
"Damned for All Time/Blood Money" - Judas, Caiaphas, Annas, Priests, The Mob
Judas' conflict, though not exactly as written, does speak to the greater truth about fulfillment of Scripture.
"The Last Supper" - Jesus, Judas and Apostles
That the disciples STILL didn't entirely know who and what they were dealing with is evident.
"Gethsemane" - Jesus
Possibly the most controversial song. That Jesus was, in part, human made his resistance to dying much more real.

"The Arrest" - Jesus, Judas, Peter, Apostles, Caiaphas, Annas, The Mob, Roman Guards
If I were to play one of the roles, I'd like it to be Peter; NOW we'll fight for you.
"Peter's Denial" - Peter, Mary, Apostles, The Mob
I was once in a Bible study and one member said she'd NEVER have denied Jesus, that she'd gave gotten the message right away; I never believed that.
"Pilate and Christ" - Pilate, Jesus, Annas, Mary, Apostles, Roman Guards, The Mob
The singular funniest thing on the album is a fellow with a distinct British accent saying, "someone Christ, king of the Jews." Featuring an ironic restatement of Hosanna.
"King Herod's Song" - Herod and his Court
High camp.
["Could We Start Again Please?" - Mary, Peter, Simon, Disciples, Roman Guards
NOT on my album; it was only from later versions.]
"Judas' Death" - Judas, Caiaphas, Annas, The Mob
Reiteration of Damed for All Time. was Judas' betrayal preordained? Yeasty stuff.
"Trial By Pilate" - Pilate, Caiaphas, Annas, Jesus, The Mob
Really gets to the core issue about predestination -"Everything is fixed and you can't change it." But if it's all predetermined, what of free will, which allowed for the Fall from grace?
"Superstar" - Judas, Soul Girls, Angels, Paparazzi
Israel in 4 B.C. DIDN'T have mass communication. Why did Jesus come THEN? And if he came NOW, would he be on radio or TV? Would we believe in Him if he were? Bringing it to today, would he be our Facebook friend? Would we follow him on Twitter? What would He feature on His MySpace page or His YouTube videos?

"Crucifixion" - Jesus, Disciples
The seven last words.
"John 19:41" - Jesus, Disciples
The final controversy, on an instrumental track, no less. The citation is to the burial plot for Jesus. What, no Resurrection? Sacrilege! But I never thought it was Lloyd Webber and Rice's job to complete the story the way orthodox Christianity does. It's THEIR telling. And it means a great deal to me, just as it is.


The videos, BTW, were primarily from the not-well-received 2000 Broadway performance which my wife and I actually saw in previews. Not having seen a Broadway musical since Raisin nearly 30 years earlier, I enjoyed it at a certain level, though some of the videos now seem a tad overwrought.
***
Another appreciation of Superstar.

My take on JCS, from a couple of years ago.

I love Jesus Christ Superstar. It's one of those albums of which I know every note, and my wife knows that if I play it in the car, I'm incommunicado for the length of the recording, because I'm too busy singing along. Great, great stuff.

My freshman year of college my roommate convinced me to audition as a dancer in a production of Jesus Christ, Superstar that was done by the Puerto Rican cultural society at SUNY at Buffalo. Luckily they didn't require the participants to be either Puerto Rican or christian since I was neither, so I became a background modern dancer and singer for the production (they took anybody) and learned the songs by heart after listening to them being rehearsed many times. My roommate dropped out because it was too time consuming, though. It was a fun time and the cast parties were great also. That was the end of my stage career, however.

I, too, listened to a vinyl-copied version over and over until the skips were ingrained in my memory. This is easily one of my favorite musicals, although i really believe that it hasn't yet had a really great Broadway production. Maybe someday.

Many syncretistic religions formed gnosticism. Gnosticism was rivaling against Christianity and gnosticism held itself better religion as Christianity was. Word gnosticism comes from Greek word gnosis, which means knowledge. Gnosticism was various effects, for instance, some Gnostics taught that divinity can be achieved through unity of the man and woman. This thought led some Gnostics to reach for divinity through sexual intercourse between the man and woman. There existed also some Gnostics, who abstained from sexual intercourse. When we know the fact that Gnostics held Christians as their enemies and that Gnostics held themselves better as Christians and that Gnostics wanted to show in every way that Gnosticism was better as Christianity, so Gnostics made so called gnostic gospels were they twisted, slandered and misrepresented the real gospels. Gnostics went so far in this misrepresent that they wrote "new gospels" by faking the real gospels. In these faked gospels Gnostics wrote that Jesus Christ was an ordinary man who has a sexual relationship with Mary Magdalene.