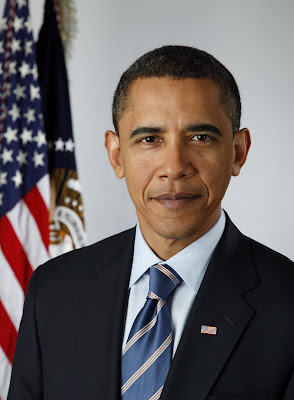 I had this ambitious blog post in mind where I would tackle a whole list of specific topics within specific categories and analyze/grade them all. Well, THAT'S not gonna happen. I did, though want to note that the more political reading I do, the less cognitive clarity I get. Particularly with criticism of Barack Obama, I hear apparent faux pas by the Obamas towards the Queen of England lumped together with legitimate concerns over whether the economic stimulus will work fast enough to avoid staflation down the road. It all becomes noise.

Listening to the Sunday morning talk shows, it seems that the greatest concern about President Obama is "where he draw the line in the sand?" Whether it be economic issues - will he pour MORE money in the banks if they fail the 'stress test'? or foreign policy - he can talk to our adversaries, but what if that doesn't work? I've come to believe that it is Obama's seeming malleability, after years of George W. Bush's apparent certainty, hat seems to make the pundits nervous.

I specifically recall the Sunday morning of April 12. What's he going to do about the Somali pirates holding Captain Philips? Doesn't he appear weak when the White House says he's "monitoring the situation"? By the end of the day (in the US), the story had totally changed.

I fully support talking with our enemies. That's what Obama said he'd do in his campaign, despite some criticism, and I believe it's the right course. He's already made substantive and long overdue changes with regard to Cuba. So, Hugh Chavez showboats by giving Obama a book (which subsequently jumps up the Amazon book sales list); doesn't matter in the long run. Talking with Mahmoud Ahmadinejad would be better than not talking. It seems that the concern is that our adversaries are all willier than the US is and that the talks are stalling tactics that ultimately won't work. Maybe so, but that doesn't mean we don't try.

When he was in Europe, Obama made comments about some mutually negative attitudes which I thought were accurate. It was embarrassing, e.g., back in 2003 when the House of Representatives renamed French fries and French toast.

I'd like to see more investigations, by Congress if not the Justice Department, in a couple areas. One is the collapse of the economic markets. The auto industry was merely incompetent, but as I heard on Bill Moyers' show, William K. Black suspects that it was more than greed and incompetence that brought down the U.S. financial sector and plunged the economy in recession — it was fraud. And he would know. When it comes to financial shenanigans, William K. Black, the former senior regulator who cracked down on banks during the savings and loan crisis of the 1980s, has seen pretty much everything.

Black made a great comparison with plane crashes. When there's an accident or even a "near miss", there's an investigation. If after a crash, the authorities said, "Let's move on," what kind of confidence would be derived from that?

The other area I'd like more information involves torture. Congressional hearings may begin to address this. It appears clear to me that Obama wanted to denounce torture, put out some documents, then move on. But "move on" just won't cut it. As Salon put it, "President Obama released memos that describe, in horrific detail, the torture techniques authorized by the Bush administration. The memos make clear that top Bush officials didn't just condone torture—they encouraged it."

Finally, there's the economy. Robert Reich gives his grades, which I think are about right. I believe that some sort of massive health care initiative needs to come out of the budget, that putting money in prevention and well care will save money down the road. But I'm STILL unconvinced that the bailout, operated by insiders such as Tim Geithner and Larry Summers, will do anything. The TARP money, going back to 2008, has been spent with ever-changing goals, without any noticeable oversight. To quote Marvin Gaye, "Makes me wanna holler, throw up both my hands." That's because, at this juncture, I don't know WHAT should happen. Those first quarter bank "profits" are largely a result of changes in the reporting mechanism.

Most people are reasonably happy with Barack Obama as President. I am, too. He's smart, he's articulate, and he's more energetic than he has a right to be, given the scope of the issues facing him. It feels like much more than 100 days, since he started dealing with them before the inauguration. I watched the press conference last night, and he proved to be - and this is by no means belittling - competent., which is a refreshing change.

Unlike certain unnamed people, I want him to succeed. His attempts to create more transparency, while incomplete, is better than I expected. Good luck, Mr. President , on the next 1360 days or so.
***
Oh, Arlen Specter (D-PA). Just wanted to write that. The Republican chair, Michael Steele, said Specter's switch is an "outrage" because he switched for "political expediency". It's true that he almost certainly would have lost his party's nomination; it's also true that his former party has moved so far to the inflexible that he was no longer comfortable there.

You just like him because he's black, man! Admit it!!!!

It's unfortunate in politics that both sides focus on the tiny, tiny things (a consequence of 24-hour news, I suspect). I heard a right-wing radio guy yesterday get all bent out of shape because Obama lost his place on the teleprompter and was a bit baffled for a moment. According to this guy (I think it was Hannity, but I'm not sure), that "proves" that Obama has no actual ideas and simply repeats what speechwriters write for him. This from a guy who (presumably) got all pissed off when people dared chuckle at Bush speaking extemporaneously and mangling the English language in the process.

Iam so tired of the analysts and pundits nit-picking every little thing about President Obama. Admit it, he is a genius and he can think and speak at the same time. The man reads and oh yes, his Columbia and Harvard educations clearly show....and yes, I like him because he is a man of color with substance, class, brains, and in my opinion, he is a chess player, always ahead of his opponents. I'm trying to remember when did the networks last keep score on a president-they did not do this with Bush, Clinton, the Senior Bush, Reagan, why are they doing this? I think we know the answer. But, the president is above all this nonsense.

Hey Rog! I might actually surprise you with this opinion (especially given the recen tone of my own blog)... but I agree with you about talking to our adversaries. We should talk to everyone UNLESS they promote terrorism in ANY WAY. We, as a nation have had a long history os talking to governments that openly talk about our destruction. (The former Soviet Union and China are two examples.) But you worte about where to "draw the line". Clearly the line should be drawn with terrorism. The SOviet Union talked about wiping us out. They built weapons of mass destruction to that end. BUT they did not sponsor terror and train terror groups designed to inflict fear and bring death to an innocent populace. We SHOULD talk to those who hate us, but NEVER talk to those that kill us.