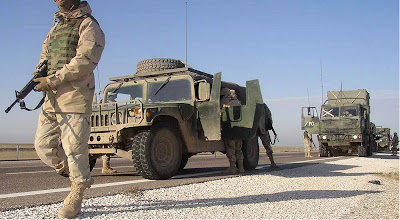 I'm not quite sure what more there is to say. Just this month, there was a study discounting the Saddam Hussein/Al-Qaeda link. This follows this 2007 report, which merely confirms what the 9/11 Commission said back in 2004. I won't even talk about the expense, which is now calculated in the TRILLIONS of dollars.

Here's a website tracking the casualties. Let us pray that we're NOT there for another hundred years.
***
I need to write more on this, but let me say that I really liked Obama's speech on race.

I read the transcript of Obama's speech this morning. Very good. Hit a lot of great points.

Reminds me of a fellow I know who, I am told, recited the Pledge of Allegiance in his school, and ended by snorting, HMMPph! rather sarcastically.

I understand where both were coming from.

I listened to much of it and thought it was great, I just wonder how much of the message will actually get out. Maybe it's being overseas this election, but I'm more cynical than ever about the ability of the American public to recognize someone who's thoughtful and refuses to be absolutist on issues. I cross my fingers I'm wrong, but I worry about the constant emphasis on trivia. When was the last time we actually saw coverage of any of the big three's POLICIES, anyway?