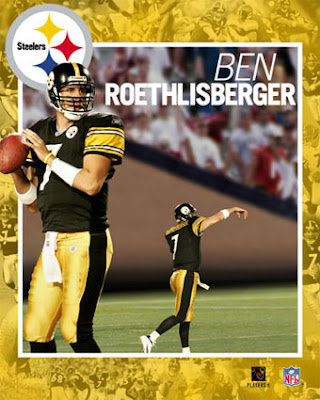 As you may have heard, Pittsburgh Steelers quarterback Ben Roethlisberger, who helped his team win the Super Bowl a couple times, will be suspended the first six games of the 16-game season for "violating the NFL's personal conduct policy." The punishment, handed down by NFL Commissioner Roger Goodell, involved "a 20-year-old college student who accused him of sexually assaulting her in a Georgia nightclub in March." The district attorney declined to prosecute, fearing he could not make his case, but he spoke in rather damning terms at a press conference HERE and HERE and HERE and HERE. I didn't to the whole thing, maybe 10 of the 40 minutes, but it was enough. This is not the first time allegations about Ben's sexual improprieties have surfaced.

What surprised me, but should not have, is this barrage of comments suggesting that he fared better or fared worse because he is white. Just Google Roethlisberger race. Some people complained that Michael Vick, dog killer, got only a two-game suspension; however, he also went to jail.

My thoughts: it's a judgment call, it got the QB's attention, but I wish action had been taken on some of these earlier incidents; much ado about not much, but race still gets infused in EVERYTHING; another team would be crazy to take him; yes.

As I commented in response to Kristi Gustafson's post (seriously - she blogged about this for some weird reason), I think a better example is Pacman Jones. Jones was crucified and declared persona non grata by the media, fans, pundits, and the NFL because he kept poor company and one of his friends shot someone in a nightclub. Roethlisberger, on the other hand, has a history of poor to downright reprehensible behavior, and yet it's actually debated and phrases like "two sides to every story" are tossed around.

Because I didn't want to get trolled (again), I ignored a follow-up reply that insinuated it was because Jones was a Cornerback and Roethlisberger is a QB, and therefore worth more money. Although if that's the case, why was the Jones situation the top news story on every sports program for months?

There is no doubt in my mind that there's an element of racial politics in this instance.

What is interesting is that some in the media have been saying that Goodell was "harder" on Ben because he was a superstar, like his conduct only warranted a two game suspension.

1. I am not sure where I stand on the adequacy of the punishment.

2. I am not sure race played a part here. It was more of him being a superstar QB. Even if he was white and didn't have the two Super Bowl rings, I think he might have sat the whole year.

3. Not sure, but I can tell you around my office, filled with Steelers fans, they would certainly understand the Rooneys sending him off. Some don't want to see it, but think it might be best. Heck, they just shipped Santonio Holmes off for bad behavior.

4. For some reason it really seems to fit the NFL well that the commissioner has so much power. I don't know why.