I sorta kinda understand what Obama was trying to do picking Rick Warren - my local newspaper, back on December 19, editorialized in favor. But the letters - here's one example - definitely disagreed, rightly.

FBI Warns of Inauguration Terror Threat. Swell. I've been nervous since the open-air conclusion to the Denver convention.

That blonde conservative woman has managed a faux insult into more self-serving promotion: "After NBC canceled me 'for life' on Monday -- until seven or eight hours later when the ban was splashed across the top of The [Sludge] Report, forcing a red-faced NBC to withdraw the ban." As Col. Potter used to say on M*A*S*H, "horse hockey!"

This week, after CNN did a story on the Gaza war, teased with the next story about "Oprah's war". It turns out it's with her weight! Not only is it an unfortunate segue, Oprah's weight - who cares! - was so last week.

Joe the Plumber Heading to Middle East To Be Correspondent for Conservative Media Outlet. Joe, who I've NEVER heard say anything approaching coherent, has officially reached minute 16 of his 15 minutes of fame.

The whole Roland Burris thing. I never thought Congress really had to right to not seat him, unless he were under 30 (he's over 70) or didn't live in Illinois. More than that, Evans-Novak play it as sport: "Burris and Richardson Flaps and Panetta Pick Enliven Washington". I'd link to the story except that it seems to be attached to some computer virus.

And it's cold, it's going to snow again tonight and by Friday, it'll even be colder, with highs in the low teens.

I need something to lift my spirits. How about Obama and Spider-Man appearing in a comic together? 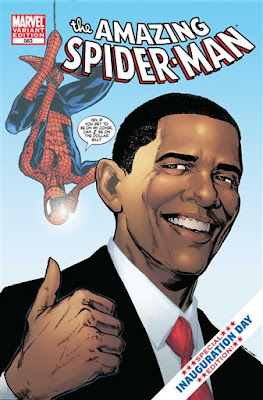 Spider-Man IS my favorite character. And Obama, while not a superhero... 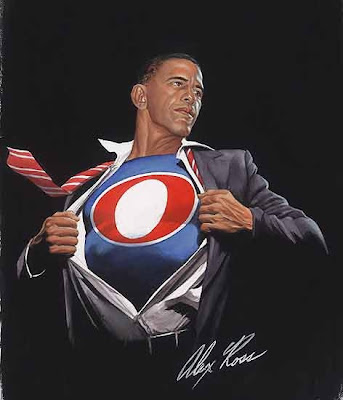 Anyway, how are YOU this cold winter? What's bugging you? Or pleasing you? (Note to Nik and Arthur: careful about telling me too much about the New Zealand summer!)

You know what's bugging me? In the morning, it's about 40 degrees, and it's only in the afternoon when it gets up into the 60s and you can open all the windows and let the pleasant breeze in. Confound it!

(Sorry: After you wrote that people in the Southern Hemisphere shouldn't talk about their summers, I couldn't resist.)

You're right--who the heck cares about Oprah's weight???!!! It's not like she's become one of those unfortunate bedridden souls from the TLC/Freak Show Channel.

The open-air conclusion to the DNC made me a nervous wreck, too.

BTW, have you ever considered moving south? We call South Florida the 6th Burrough because so many New Yorkers have relocated here.

Would it make you feel better to know that it's been cloudy and sometimes rainy the past few days? And the official highs in Auckland lately have been up to only around 23 (about 73F), so it's not been summery hot. As I type this, in fact, it's only 17 (63F). Okay, so the sky is blue without a single cloud, but they are predicted to return. So, it's not ALL good....