It's Black History Month Again, and I've Got Nothin' 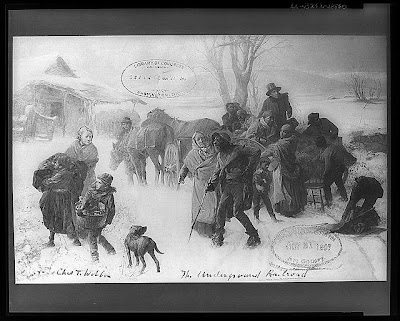 It's that time of year again. Somehow, I've become the unofficial leader of the group of people to put this thing together in my church this year - again - and I'm not sure what new angle I can come up with.

Oh, it not as though we have absolutely zero planned. We have a speaker for one Sunday. There will be a kente cloth presentation. And I expect there will a luncheon after church one week.

More at issue are three weeks of adult education. I think one Sunday the topic will be related to race relations in the era of an Obama presidency. How does he change the conversation? Some think this means the black community has arrived, and such things as B H Month are no longer needed!

To that last point, I would disagree. A Swahili aphorism states: "You are what you make of yourself, and not what others make you." A positive self-concept is important, and so an awareness of the richness of Black history becomes important. This is one of the reasons we continue to celebrate Black History Month, first celebrated in 1926.

Another thought is to use the class would to show film clips - 15 to 20 minutes - and then discuss for remainder of class. One white person suggested segments from White Man's Burden, a 1995 movie I was unfamiliar with. (Anyone out there seen it? ) He said this film is always an eye opener for white audiences, and it does a good job of showing unnoticed race-based behaviors and norms in our society.

I will be participating in "The 3 Biggest Diversity Blunders Your Organization Could Be Making Right Now (And How to Avoid Them)" workshop in a couple weeks, and that might have some help. But that won't be for a couple weeks, and I need to put something together for the church newsletter this Friday.

You might want to consider assembling a mini-documentary using public domain footage from archive.org...or you might be able to get some good literature (like Huckleberry Finn) from librivox.org...

I find that many people are woefully under-informed about W. E. B. DuBois, or basically anybody who came before 1950. And, of course in light of Prop 8, it's never bad to talk about Bayard Rustin.

I like all these suggestions (and may steal them in the future…), but I especially like GayProf's idea of talking about Bayard Rustin—different and timely, too.

But it also seems to me that the sentiment you mentioned—that there's no longer a need for BH Month—may be very pervasive among a lot of white folks. I think that the challenge is to make them look beyond Obama to the wider implications of race in society, and how Obama's election doesn't suddenly change everything.

Talking about Rustin could be one way to jolt them out of thinking of just black v. white to see the many different areas where race is relevant as well as the multiple levels of oppression that can co-exist. In that way, it could present not just a part of Black History that's too often neglected or ignored, it could also help people think about prejudice in general.

Greetings from Mill Hill, London, England. Our local Anglican church was built by William Wilberforce, who is responsible for abolition of slavery in Britain. To celebrate Black history month last year we had the London Community Gospel Choir perform. I did the sound for the show. I don't know if Wilberforce is well known in the USA? There is a great film about his life and his struggles. We had a year of events at the church to commemorate Wilberforce and a really good attendance.

Interestingly enough the church probably had a 100% white congregation when I was a kid in the 60's (Mill Hill is a very middle class area). It's probably now 50% black with much immigration from Africa in the last few years.