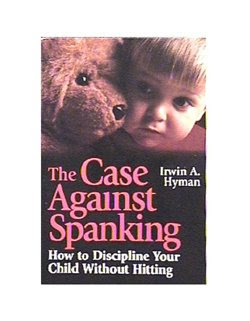 My father believed in spanking; I don't, and my sisters don't, and there is a correlation.

I was reading the syndicated column by Dr. T. Berry Brazelton, Family Matters. The title of one of his "Family Matters" columns in early December 2008 was "Spanking is not necessary, can be harmful". He had expressed that opinion before and that didn't surprise me.

What I DID find jaw-dropping, though, was this paragraph:
"Many parents who were spanked as children tell us that they do not remember why they were spanked, or what they learned, but that they sure do remember being spanked, how it felt and how angry they were. Many remember feeling less trusting of their
parents' authority and wisdom when physical force was used against them."

Not a month before that, I had asked both of my sisters if they remembered WHY we were spanked, and except for one particular incident - my worst spanking, and I wasn't even guilty of an infraction - none of us had ANY idea. Even the baby sister, who seems to remember everything fromk our past, can't remember WHY.

HOW we remember. the length of the strap, and its location in the kitchen. Often we were expected to get the strap, and failure to do so would have meant additional lashes.

So, the questions:
1) Were you spanked as a child? How often? If so, do you think it was justified? If you weren't spanked, what types of punishments did you receive instead?
2) If you're a parent (or surrogate parent), what is your philosophy on spanking?
ROG
Posted by Roger Owen Green at 1/24/2009 04:52:00 AM

I'd not given it much thought, but I only remember it when I felt a sense of injustice at what happened. I guess most of the time I just accepted that it was justified and moved on.

My daughter who is 13 still remembers getting told off by a lady in a shop in spain for touching sale items when she hadn't.

Likewise I also remember getting caned at school when I hadn't done something, but can't remember anything about the dozen or so times when I had.

My fathers philosophy with punishment of children was that children had to learn that if they annoyed people the consequences could be pretty nasty. He'd tend to punish us more if he was angry than if we'd done something wrong which didn't upset him.

When I was an adult we discussed it and his view was that violence was part of life so you had to learn to deal with it.

I myself was very rarely spanked, in fact, it was only an occasional swat on the rear, and actually I remember the incidents, and they were deserved for doing something that I was specifically told not to do.

Raising my daughter, we have administered a Spank ( one smack on the butt) maybe a total of four times when she was between the ages of four and six, and it was only after repeated warnings; the last warning was followed with the statement "If you do that again, I'm going to give you a Spank to help you to remember." It was usually about doing something dangerous or potentially destructive. If she was found in flagrante delicto, she would get one swat, and never in fact repeated that activity again. Now, at age (almost fourteen) she can tell you each incident.

It made me allergic to pain for many years. Now that I'm older, I can appreciate the feeling of getting a new tattoo.

I don't believe anything good comes from spanking. Why not communicate? Why does it have to be physical? I see no need for it.

The only spanking I recall was for something incredibly trivial and mundane: I was being a grumpy sore loser about something. I'm sure I committed much worse infractions. I remember just thinking "Huh????" The lasting impression is that spanking has less to do with the infraction and more to do with the mood of the parent.